Brigadier General Doucette thanked all those involved in the JWC’s success over the years as NATO’s sole trainer of joint operational headquarters and said:

“This is clearly a very special year in our history. Ten years ago, today, the JWC stood up here but NATO’s relationship with Stavanger dates back to 1994. Over the years the JWC has played a pivotal role in NATO’s transformation. The most important part of the JWC is its people ----- a team of dedicated personnel represented today by the sixteen Nations. That’s a very strong showing for NATO’s footprint in Norway.”

Brigadier General Doucette then thanked our gracious Norwegian hosts. He said: “THANK YOU to our host nation for everything over the years to support the JWC’s mission.”

And of course it would not be a celebration without cake! The tenth anniversary cake was made by Mrs. Tanja Eissfeldt including the tenth anniversary logo and the flags of JWC’s sixteen Nations. Before cutting the cake, Brigadier General Doucette offered a toast: “Thank you for all you do and will be doing on behalf of the Nations that we represent and support! So, here’s to the next ten years!" 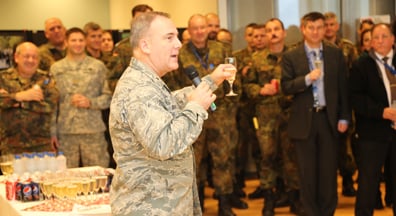 The JWC was established on 23 October 2003 in Stavanger, Norway, as an integral part of NATO’s new command structure which was agreed by Heads of State and Government at the 2002 Prague NATO Summit, as subordinate to the NATO’s new strategic transformational command, Allied Command Transformation (ACT) in Norfolk, Virginia, United States.