The 12th Conference on Civil Protection (Samfunnssikkerhetskonferansen 2015) was held at the University of Stavanger (UiS) on Wednesday, 7 January.

Jointly organized by the County Governor of Rogaland, the University of Stavanger, Stavanger University Hospital, the Rogaland Police District and NATO’s Joint Warfare Centre (JWC), the overarching theme of this year’s conference focused on risk and vulnerability analysis, complex crisis management matters, and product and consumer safety and logistics.

One of the keynote speeches of the conference was delivered by JWC’s Commander, German Army Major General Reinhard Wolski. During his presentation, he highlighted JWC’s defining position as NATO’s premier collective training and exercising facility at the operational level since 2003 and explained in brief about the Centre’s recent exercises, focusing on NATO military crisis response and management. 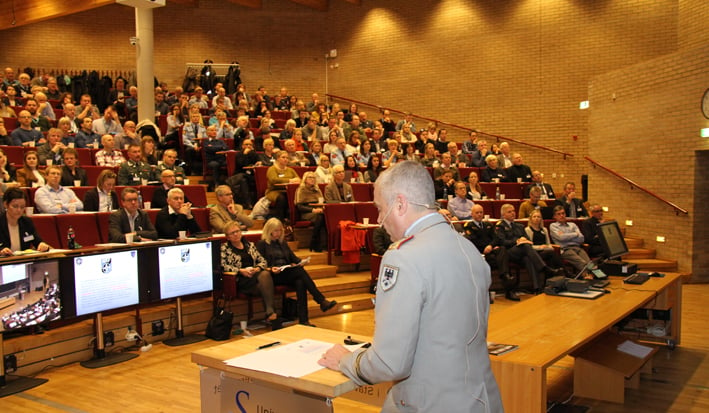 The conference brought together key researchers and parties specializing in civil protection and emergency planning with the aim of stimulating a future-oriented discussion about crisis management, as well as emergency planning responsibility, including threat assessment and prevention.

Samfunnssikkerhetskonferansen 2015 was attended by more than 300 participants, including officials from regional and local administrations, professors from universities, government agencies and the civil society.

The opening speech was delivered by the Dean of the University of Stavanger, Marit Boyesen. She said that the conference was a great window of opportunity for networking and exchanging experiences and future strategies. Other keynote speakers included State Secretary Hans J. Røsjorde from the Ministry of Justice and Emergency Planning; Director of the Norwegian Board of Health Jan Fredrik Andersen; Professor Ove Njå and Professor Terje Aven representing SEROS (the Centre for Risk Management and Societal Safety); Erik Furevik from the Norwegian Directorate for Civilian Protection; Senior Researcher from the Armed Forces’ Research Institute (FFI) Gunn Alice Birkemo; Mayor of the Municipality of Hå Mons Skrettingland and other key researchers of civil protection and emergency planning and preparedness.

During the conference, the keynote speakers shared their latest views and insights into topics such as scientific and practice-based civil protection, emergency planning at a county (local government) level, the risks and vulnerabilities in the aftermath of natural disasters (the case studies such as the flood in Vigrestad and the landslide in Suldal), supervision of emergency planning in public administration and operational units, Norwegian food emergency planning seen from a global perspective as well as the outbreak of Ebola epidemic, risk reduction and protection.

To read more about the event (in Norwegian) please click here.